I don't usually post at this time of day but you’ve all been so sweet and supportive I feel dreadful for not updating on Jim doctor’s appointment. Things have been a little frenzied here and my head it’s quite screwed on tight.

I only won half the battle with Jim’s doctor. He has agreed to taking Jim off the one medication we have felt has been doing him more harm then good but he wants to see how Jim does before considering increasing his dose of prednisone. Jim says he is already feeling better, he isn’t dizzy anymore and I‘ve noticed his memory has improved, some. Some of the other issues may take a bit longer to get out of his system but we feel we may be on the right track. Yesterday he actually felt well enough to go out to lunch and a drive around town. Can’t tell you how long it’s been since we’ve been able to do. Nothing special but it was a lovely afternoon.

Regarding the A2 size cards.  I must admit when Terry asked I needed to look it up. It seems several of you are unfamiliar with that term as well. An A2 size card is 4 ¼” X 5 ½” folded. 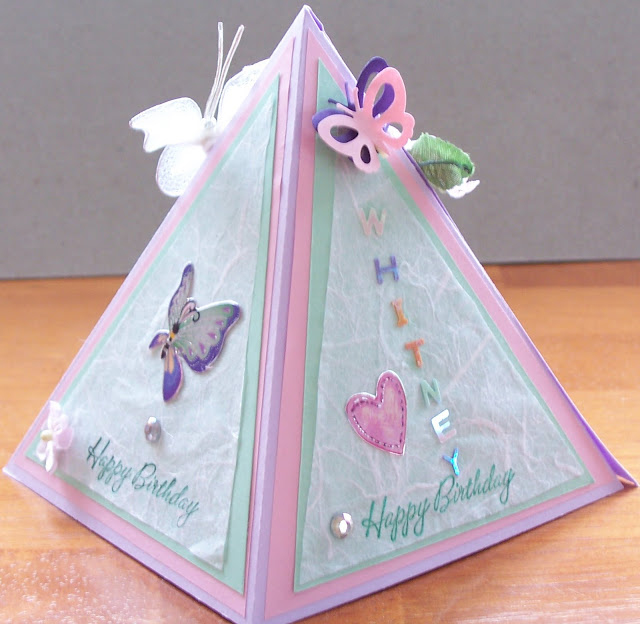 My card reader seems to be on the fritz. Until I get it replaced and can upload current photos I thought I’d share a card I made some years ago for my granddaughter Whitney. I don’t remember where I found the tutorial for this card. I do remember I found it confusing and ended up with a LOT of scraps as I had a dickens of a time getting it scored and cut properly. I also remember I took an oath never to try to make another like it. I don't know why but when opened flat every photo came out blue, the first photo shows it's true colors. 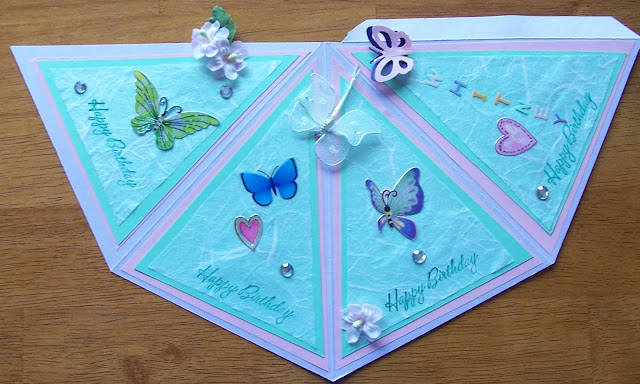 Okay what happened to spring?  We had one glorious day of sunshine and a brake from the winds, ONE day and it was gone again.  It is cold, overcast and blustery here.  Even had some snow, not a lot, it didn't last but still it was snow.  Come on spring!
Be Well and Have an Amazing Day!

Anonymous comments are not allowed on this blog. Sorry but constant spam has forced me down the route of stopping them!

Bernie
Yakima, WA, United States
Welcome! I’m Bernie, married to my Jim for 32 years. We are a blended family of yours, mine and ours. Our two girls and three boys have blessed us with 12 grandchildren and 5 great grandchildren. My crafting space is a well organized (although often untidy) 5’ by 5’ walk in closet. I shop sales, use coupons and spend hours going thru clearance bins, yard sales and thrift shops. I was born a crafter and a recycler. I hope to share tips and tricks for creating cards without spending large sums of money. I hope you will find a little inspiration while you are here. Contact Me At: berniescraftcloset@gmail.com